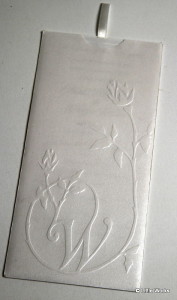 A good example of embossed stationery

Our customers often come to us and ask us for embossing and/or debossing on their stationery because somewhere they have heard the term being used by a friend or business associate.

From a design perspective embossing is not as simple a process as it would appear to be and there are two important considerations that you need to bear in mind:

During the embossing process the paper is being stretched to create the raised effect and it is important to use paper stock that has a high fibre or a relatively high cotton content.

The more wood pulp that is used in making the paper the higher the fibre content will be.   Sometimes what happens if a printed image is embossed on a low fibre content paper, the paper will be inclined to crack if the embossing is pushed hard, called feathering. 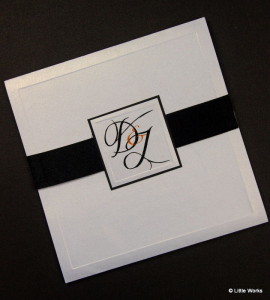 A combination of debossing and embossing on wedding stationery

This can be avoided firstly by using a good quality paper and also by not embossing too hard onto the paper. The feathering manifest itself as a fine jagged line which is the colour of the paper coming through on the printed image, thus spoiling the image.

Fine details in a graphic do not emboss well.  But how fine is fine? As a general rule of thumb try not to emboss anything that is thinner than 1.5 point with an absolute minimum being about 1.25 point (in limited areas only).

To emboss elaborate script fonts is an absolute waste of time and where you use a blind emboss (where there is no printed image) it is important to over-accentuate your entire design because of the visual subtleness of this process.

Your artwork might look a bit strange, being all fattened up, but it will look perfectly fine on the finished item.

Some important points to remember:

Debossing is generally not as popular as embossing, but it is an attractive option on your stationery. One area where it works particularly well is in conjunction with foiling.  From a design perspective it is much more forgiving than embossing.

There are also very few constraints in terms of fineness of detail as well as the choice of paper.  One consideration in respect of your choice of paper is that you should choose one that ‘bulks’ as much as possible.  In relation to paper, bulking relates to the thickness of a paper in relation to its weight. 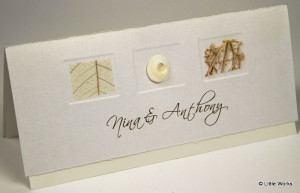 For example a coated paper of 350 gsm might have a thickness of around 350 micron whereas an uncoated paper of the same grammage could bulk to as much as 450 micron. The reason for choosing bulky papers is that it is much easier to squash a bulky paper and the end result is a much more debossed effect.  One thing to bear in mind though is that bulky papers are generally more inexpensive.